...and on the Seventh Day 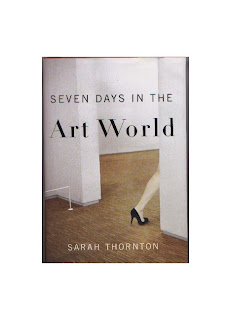 Sarah Thornton writes: "I left the British Pavilion with its giveaway goods - a tote bag, a catalogue, some temporary tattoos, and a white hat embroidered with pink with the words ALWAYS WANTING YOU...LOVE TRACE X - and headed over to the American Pavilion, which looks like a little state capitol building. Nancy Spector, the pavilion's curator, was standing in the lobby, basking in the warm glow of a luminous sculpture called "Untitled" (America) by Felix Gonzalez-Torres. The Cuban-born Gonzalez-Torres died of complications due to AIDS in 1996. Some people were lamenting the fact that the pavilion show had taken so long to come; others complained that the pavilion should celebrate the work of a living artist. One irate curator even exclaimed, "maybe next time the U.S. will decide to show Whistler!" But the consensus seemed to be wrong; the pavilion was beautiful but funereal.
"Certainly the reception was not as overwhelmingly upbeat as that accorded to Ed ruscha's 2005 pavilion, in which five black and white paintings were hung with five new color canvases depicting the same Los Angeles locations. On show after the invasion of Iraq entitled "The Course of Empire," the exhibition had a freshness and a sense of history that satisfied many people's expectations."

Dave Hickey wrote a piece for a recent issue of Art in America about being asked to be the next American curator for the Venice Biennale, saying that the 2007 one was too sad and that his would be happy. thank you Dave, but my parents took me to the New York World's Fair in 1964 when I was all of six and I was whirled through the pre-Disney purchase debut "It's a Small World after All" there, but was more permanently impressed by Louise Nevelson's wall of black painted wood cabinetry. Picasso's Guernica and Rousseau's The Dream which I continued the dream it put me into by dreaming I was inside of his painting the very same night.
Posted by Lori Ellison at 7:35 AM