The Importance of Being Louise Bourgeois 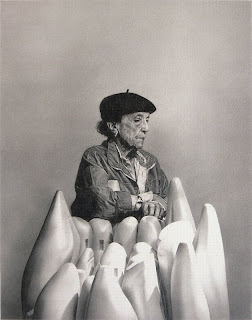 For thousands of postwar American women, Scout is a touchstone of childhood authenticity . . . We were all Scout once: unfiltered, free-ranging, with a physical confidence rooted in a prepubescent androgyny -- qualities inevitably poisoned by the idiotic affectations of adolescence. (When she senses the feminizing agenda her stuffy aunt has in store for her, Scout feels "the starched walls of a pink cotton penitentiary closing in" on her.) Lee's magic . . . was in ventriloquizing the experiences of a 6-year-old in the voice of a grown woman, offering a bridge back to childhood. As a motherless child, Scout demonstrates how children treat life's curve balls as what happens, not what shouldn't happen, and adjust their expectations accordingly. She's unlike other girl characters, filmic or literary, of her age . . . What other girl character has Scout's open grace, her left hook, and the narrative to herself from beginning to end?

To be born female is indeed to feel "the starched walls of a pink cotton penitentiary" closing in on one. That Louise
Bourgeios was an escape artist of the penitentiary of her childhood, with a father who humiliated her attractiveness and her failure to be a male like her brother, is one of the great Houdini acts of the century.

Her groupings of monads huddling together yet not touching reminds me of the parable of Schopenhauer's porcupines, who close in on each other for warmth only to be repelled by the exact distance of their spines. that this spininess is a human condition of wanting warmth and intimacy only to experience our own and other's spininess is accurately portrayed in these groupings or small tribal crowds.


Everybody Used to Be Womanfish in Womanhouse.

And I was thinkin' about my chemical makeup
I was so full of estrogen
I didn't know if I would be a
G-g-girl or a boy
But I was floating over and over,
Over and over, over
And over and I don't know what I saw through my lidless eyes
It may have been the moon and the skies.


It is a definite mystery to all but mature men what a woman's erotics comes from. I went to see a Louise Bourgeois exhibit in Philadelphia with two girlfriends and her marble carvings of grouped phalli made us all bubbly, (we almost giggled like schoolgirls) and when discussing what we liked about Louise Bourgeois in an art history class the male instructor Gerald Silk dismissed Bourgeois all but dismissed her achievement saying her work was too much like Gaston Lachaise and he brought up his sculpture titled Princess with its long neck turning into a phallus like creature, and I said it is not erotic like the rest of her work. There was a shared glance between Pat, Bernadette and myself trying to quell some rising laughter from the happiness we had experienced on seeing this show. It is true that Greeks and on up through the Renaissance marble is used to depict male nudes for its sensual surface - something about marble makes one want to run your hands over it.

The spiders have been much exhibited (exposed) and much ink spilled in their favor, and except for the cross cultural archetype of the spider woman goddess, they are for this writer the least interesting of her oeuvre in its entirety, so I would like to discuss her Red Rooms, as they fit into her theme of the womanhouse so well, as celebrated in the lyric above. I had seen the Red rooms at Peter Blum but it was not until the Guggenheim retrospective that I got them in a completely new way - I made the discovery that by peering through each of the slats between two doors serially around the installations, the reading is very different. It at once turns one into a voyeuristic child peering into the not quite closed door into a kind of keyhole vignette and the focus is as cinematic as one of Hitchcock's closeups. What was once as heimlich as looking into a jumble shop when one cranes one's neck into the wide space between the doors with the chain across the space becomes fraught and unheimlich like the child's phrase redrum in the Shining. Each space in the thin aperture as one moves around the outside circle becomes the zoetrope of a pixillated mystery like James' Turn of the Screw. One really does see with the kind of shiver of muted terror but happy awe of a small child. And that is a kind of achievement only available for those who have made this delightful discovery. there have been controversies over how much to read her childhood parables into her work, and possibly it gave Bourgeois too much license to have tantrums most of her adult life. But the dialectic of the heimlich?unheimlich is one familiar to any child who grew up with a haunted house.
Posted by Lori Ellison at 5:25 AM