David Salle in his Youth 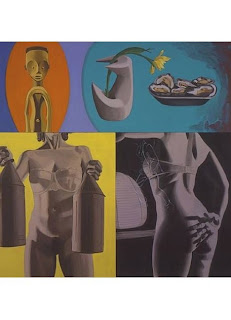 
On 8 May 2010 the Mary Boone Gallery will open at its Chelsea location Some Pictures
from the 80s, an exhibition of paintings from the 1980s by DAVID SALLE that have been
borrowed from museums and private collections. In an essay for the fully-illustrated
catalogue that accompanies the exhibition, Klaus Kertess has written:

The late 1970s and early 1980s witnessed a growing reconciliation of the figure with the
planes of painting fostered by such artists as Jean Michel Basquiat, Francesco Clemente,
Eric Fischl, Anselm Kiefer (and several fellow German neo-Expressionists), Julian
Schnabel, and David Salle. With the exception of Basquiat and Salle, these artists
propelled their figures into unified grounds and space, ranging from the loosely mimetic
beaches, interiors, bullfighting rings et al that Fischl’s figures inhabit to the Surrealist-
inspired dream spaces Clemente’s figures waft through. Basquiat’s writerly figures and
words cling more precariously to modernist flatness looking back to late Picasso and
Twombly. His words are seen/read in the context of the figures and vice versa. Salle’s
figures, on the other hand, are seen in no context to the real world, only within the
context of the painted plane they inhabit.
Posted by Lori Ellison at 7:10 AM